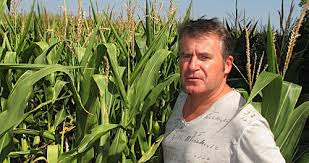 Three years ago a French farmer sued MONSANTO AND WON, stating that the company’s pesticide product known as Lasso had poisoned him, causing neurological problems. The company appealed the court decision by taking the lawsuit to a higher French court, just days ago the French court upheld the original decision that Monsanto’s product Lasso poisoned the French farmer, causing his neurological concerns.
Lasso is warned to cause blindness, respiratory irritation, liver damage, kidney damage, eye nerve inflammation, jaundice, bladder inflammation, the destruction of red blood cells and blood in urine, as well as other serious health effects.
As a result, the database includes little toxicity information about its product Roundup. The database reports that Monsanto has not provided any information about any possible chronic health effects from use of or exposure to Roundup.
Monsanto now focuses its attention on manufacturing and distributing other pesticide products like Roundup as well as genetically-modified seeds. Roundup has also received international attention. In the spring of this year, the World Health Organization indicated that glyphosate—an ingredient in Monsanto’s Roundup—as well as other pesticides are probable carcinogens to humans.
Many feel that the Monsanto brand “Lasso” and the brand “Roundup” in reality, are the same blend of pesticides.

Vermicomposting and Compost Tea
The term “vermicomposting” verses regular composting simply means the use of worms rather than ‘normal’ composting which is:
In North America, "anaerobic composting" generally means using cow, steer and chicken manure in addition to cuttings, unused food and just about anything else found lying around that is an organic source.
Vermicomposting for most gardeners is the use of red worms in addition to lawn clippings and organic  garbage. A new fad is using compost tea, which is the drippings from an elevated compost pile or container.

Compost teas are defined as water extracts brewed from composted materials and can be derived from aerobic or anaerobic processes. Compost teas are generally produced from adding one volume of compost to 4-10 volumes of water, but there has also been debate about the benefits of aerating the mixture. Field studies have shown the benefits of adding compost teas to crops due to the adding of organic matter, increased nutrient availability and increased microbial activity. They have also been shown to have an effect on plant pathogens.

Gardeners that like the results and physical activity necessary to produce compost tea, should know that the nutrient levels that red wiggler worms produce, even when household and garden scraps are used is quite low.
Rainbow Farms Fertilizer from mealworms (which is not a worm at all) is proven to have 300% more nutrients than red wiggler compost and contains over 75 MILLION bacteria per gram (QUICK GRO brand) which are the microorganisms that create needed soil/plant nutrients.
Rainbow Farms Fertilizer maintains a patent on LIQUID GRO which is a concentrated liquid fertilizer that contains over 100 times the nutrients found in compost teas (and you don’t have to do all that work!)
Many compost gardeners add our LAWN & GARDEN mealworm time-release pellets to their compost piles to get adequate nutrients for their soil and plants.


As our products are 100% natural and 100% organic, there are no worries to vegetarians and those wanting healthy crops.

More than 24 states now allow medical cannabis users to purchase or grow their own plants for significant health reasons.
Most marijuana co-ops however, buy and sell this medicine with little concern to how it was actually grown!
Many marijuana growers that supply these medical co-ops  are still using synthetic fertilizers to garner large plants for higher profits. Additionally, pesticides are used more often than not. LOTS of pesticides!

RAINBOW FARMS FERTILIZER has produced a safe, healthy fertilizer for medical patients  whom wish for 'clean' medication without the health threat of pesticides or toxic elements contained in the fertilizer. As a matter of fact, a majority of our web site sales are of our "CANNABIS GRO" dry fertilizer and our "LIQUID GRO CONCENTRATE" for both indoor and outdoor growing. Diluted one to four parts of water, LIQUID GRO is used as a foliar spray. In the event that pests or mold is seen beginning, a dilution of one to three parts of water safely eliminates this problem. Inhaling or ingesting a variety of toxins and steroids with your medication is to be avoided. Use Rainbow Farms Fertilizer for a truly healthy grow! 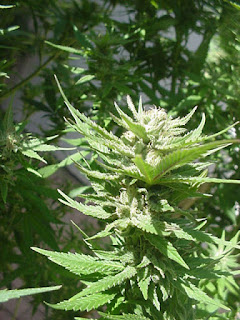 BIO-FERTILIZER FOR YOUR GARDEN

Containing more than 75 MILLION elements of bacteria per gram, RAINBOW FARMS FERTILIZER (100% organic) brands of QUICK GRO AND VEGGIE GRO are healthy bio-fertilizers for your plants!

A Bio fertilizer (also bio-fertilizer) is a substance which contains living microorganisms which, when applied to seed, plant surfaces, or soil, colonizes the interior of the plant and promotes growth by increasing the supply or availability of primary nutrients to the host plant. Bio-fertilizers add nutrients through the natural processes of  nitrogen fixation, and stimulating plant growth through the synthesis of growth-promoting substances. Bio-fertilizers can be expected to reduce the use of chemical fertilizers and pesticides. The microorganisms in bio-fertilizers restore the soil's natural nutrient cycle and build soil organic matter. Through the use of bio-fertilizers, healthy plants can be grown, while enhancing the sustainability and the health of the soil. Since they play several roles, a preferred scientific term for such beneficial bacteria is "plant-growth promoting rhizobacteria" (PGPR). Therefore, they are extremely advantageous in enriching soil fertility and fulfilling plant nutrient requirements by supplying the organic nutrients through microorganism and their byproducts. Hence, bio-fertilizers do not contain any chemicals which are harmful to the living soil.

For many years the FDA has allowed "organic" foods and "certified organic foods" to be saturated with toxic pesticides . . .

A new study released by CBC News found that almost half of organic fruits and vegetables tested in locations across Canada over the last two years are contaminated with pesticides. And almost 2 percent of the samples tested actually violated the maximum allowable limits for the presence of pesticides, according to data provided by the Canadian Food Inspection Agency (CFIA).  This upper limit is the amount set for any type of produce, not just organic.

Rainbow Farms Fertilizer is actually a bio-fertilizer that naturally reduces pests and mold. Our LIQUID GRO when diluted, is a foliar spray and a natural pest deterrent! 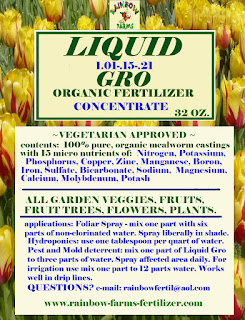 RAINBOW FARMS FERTILIZER
is VEGETARIAN APPROVED
for use on all veggies, herbs and fruits.
100% pure 100% organic bio-fertilizer
is made from mealworm frass which are fed
wheat bran and carrots!
No chemicals, toxins or animal manure. Find out about LIQUID GRO!
www.rainbow-farms-fertilizer.com

After many years of recommending Bone and Blood Meal, the folks at Rodale Press (Organic Gardening Magazine) reversed their position and now no longer recommend or advise growers to use blends that contain Bone Meal, Blood Meal or commercial steer and chicken manure. Over past years there has been an increasing number of transmitted diseases to garden soil from the toxins often used; antibiotics, growth hormones and steroids. "Not worth the potential health problem, even if it's only a small chance. There are plenty of vegetative sources without having to use animal sources." – Michael G. Fertilizer expert, Extension Institution.

"Rainbow Farms mealworm castings however, are probably "organic" in the true sense of the word. It is not comprised of elements containing contaminates and is pure mealworm castings and not a blend. Anything else that comes from animal byproducts is suspect and I would not use them." -Michael G. Extension Institution

Hi Joe,
Your logo is certainly eye-catching! Thanks so much for sending the information on your product – I have passed it along to Doug Hall, our Garden Editor. I think our readers would respond well to your product, so I am copying Jessica Siegel.  Your mealworms must be happy campers from the great food you feed them.

Frederick from Healthy Greens sent a few photos of his Aquaponic growing test using only Rainbow Farms Fertilizer LIQUID GRO and LIQUID GRO tea. He planted watermelon, corn and several other dirt-grown veggies only in water and LIQUID GRO (which he also uses on his organic wheat grass and other organic herbs. 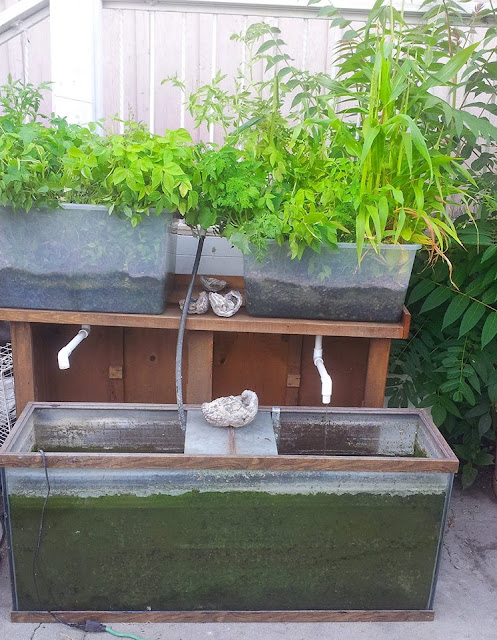 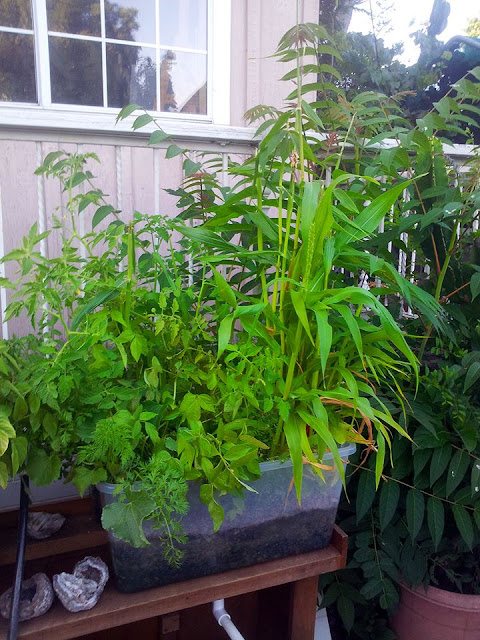